In our era of feminist revolt against the God-ordained family order, fathers – and men in general – have taken a harsh beating. Men have been relegated to the shadows as women have stepped forward to assert their so-called dominance. Advertising, mainstream media, Hollywood, public schooling, the courts, ad inifinitum, have stepped forward to belittle and emasculate men, denigrate husbands, dismiss the relevance of fatherhood, and promote a Marxist-style culture devoid of time-tested values and traditional gender roles. This Father’s Day article is a tribute to fathers and to all real men everywhere.

Men, you are sons of Almighty God. You are loved. You are important. You are irreplaceable. You have a weighty burden of leadership to shoulder. Your role is absolutely critical to the proper function and safety of society. You were appointed by God as the leaders and protectors of your home and society. The patriarchal order established in the days of Adam and Eve is still in force today. 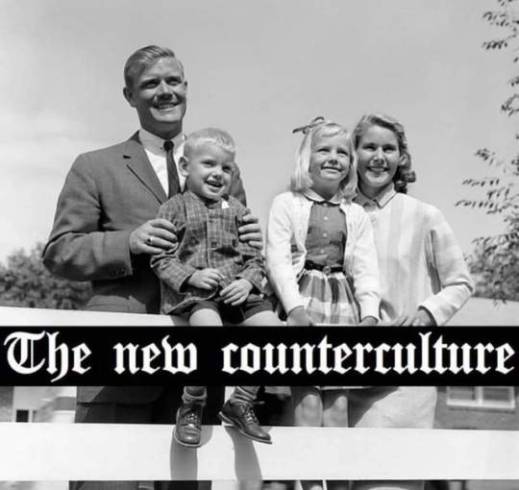 The family is the central building block of society. And the foundation of a good home is the Biblical patriarchal order. It is when society goes away from or twists the patriarchal order, as Marxists everywhere seek to do, that things fall apart. In light of the fact that one of the stated communist goals is to “abolish the family,” the need for real men to step forward and become strong husbands and fathers is self-evident.

In October 1973, Elder A. Theodore Tuttle voiced concern about the “diminishing role of the father.” He explained the importance of fathers and gave sage advice about how men can more faithfully fulfill their duties in the home. His words are even more applicable today. Said he:

“There is genuine concern over the diminishing role of the father in the home. His influence is fading. Presiding responsibilities formerly assumed are left either to the mother or to agencies outside the home. This diminishing role is at the root of a multitude of our problems. Numerous things go awry when the scriptural family organization is upset!

“In reality, each family is a dominion within itself. Father heads that government. In the beginning it was the only government on the earth and was passed down from Adam to his descendants. Properly organized in the Church, the father is the patriarch of an eternal family unit. Heaven, to us, will be simply an extension of an ideal home. As the presiding priesthood officer, the father fills an irreplaceable role. . . . 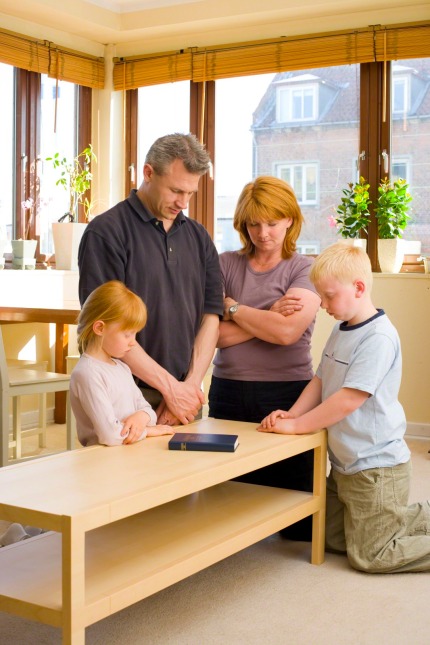 “The father exercises his spiritual leadership in the home by calling his family to prayer each morning and evening. Weekly family home evening, likewise, is called and presided over by the father, though all others participate.

“The father is the protector of the home. He guards it against the intrusion of evil from without. Formerly he protected his home with weapons and shuttered windows. Today the task is more complex. Barred doors and windows protect only against the intrusion of a corporeal creature. It is not an easy thing to protect one’s family against intrusions of evil into the minds and spirits of family members. These influences can and do flow freely into the home. Satan can subtly beguile the children of men . . . He need not break down the door.

“Fathers, you will have to live close to the Lord. Develop a sensitivity to the impressions of the Spirit.

“There is yet another intrusion into the home that needs to be mentioned. It is an unwise father who carries to his family his daily business cares. They disturb the peace existing there. He should leave his worries at the office and enter his home with the spirit of peace in his heart and with the love of God burning within him. If there is friction, his presence should soothe it. If there is turmoil, he should resolve it. . . .

“Fathers, draw close to your children. Learn to communicate. Learn to listen. This means giving a father’s most valuable commodity—time! Only good results occur when a father interviews his sons and daughters regularly. He can know their problems and their hopes. He can align himself with them as their unconditional friend. To the extent we become friends with our children in unconditional love, to that extent we become like our Heavenly Father. . . .

“And finally, the father is to be an example of the highest Christian virtues. To walk uprightly in the admonition of the Lord requires not only patience and forebearance, but an exercise in constant practice of all the Christian virtues by each family member. Perhaps the Lord knew this when he instituted the family. A man needs the responsibility of a wife and family. He needs the responsibility of being an example of righteousness. There is wisdom in this requirement. This kind of gentle persuasion is needed to keep a father “on course” and gently guide him toward perfection.

“In the family relationship, we find our best laboratory in which to practice celestial living. While this task is fraught with much challenge and some adversity, it is, nevertheless, blessed with that supreme joy that can come only to a father.

“It should have great meaning that of all the titles of respect and honor and admiration that could be given him, that God himself, he who is the highest of all, chose to be addressed simply as “Father.””

Can you sense the magnitude of your calling as a father?! Fatherhood is the greatest calling, role, and adventure a man can experience. Nothing will build a man’s character faster than having a wife and children to teach, discipline, lead, protect, and provide for. Nothing will make a man square his shoulders and lengthen his stride quicker than the serious responsibility of fatherhood. Nothing is more fulfilling and pleasant than having a family. Indeed, the Lord has said that children are a man’s “reward” and that “happy is the man that hath his quiver full of them” (Psalm 127:3-5). 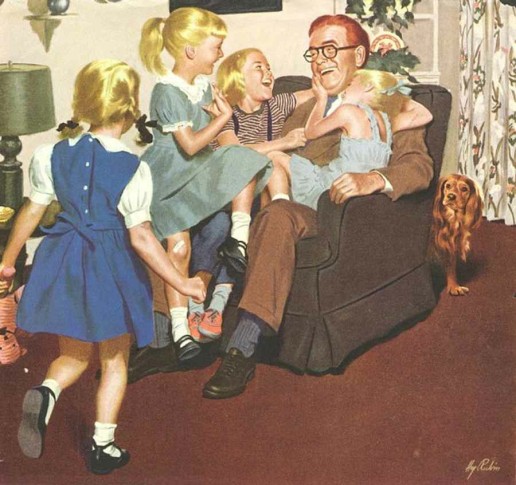 Men are the God-ordained leaders of the home. We do not know all the reasons why the Lord set it up this way, but He did. And this arrangement has worked in every corner of the earth for millennia. All other arrangements breed corruption and failure, as history amply attests.

A man is the head of the home and a woman is the heart. Both heart and head must work in tandem and fulfill their assigned roles if the body is to function. If a heart stops pumping blood, the body dies. If the brain stops sending signals to the vital organs in the body, they cease to work and death results. Men and women complement each other. A woman absolutely cannot fulfill a man’s role or replace his influence, and no right-thinking person believes a man can do what a woman does.

Biologically, anatomically, emotionally, and even intellectually, men and women are different. Men were physically designed by nature’s God to be able to protect and provide for their families. They were also spiritually and emotionally calculated to be leaders who used reason and force of will to make hard decisions affecting entire families. Women cannot replace men in these functions, and men must not abdicate their role.

Modern men must cut through the haze of Red propaganda and remember who they are. They must steel themselves and become the leaders in their homes and in society. They must remember that their personal feelings notwithstanding, the God of Heaven has appointed them to lead. Men must be the spiritual patriarchs of their homes and lead by righteous example. They must discipline with loving firmness in order for their children to grow and for their marriages to strengthen. As Elder LeGrand Curtis once said, “Discipline is organized love.” 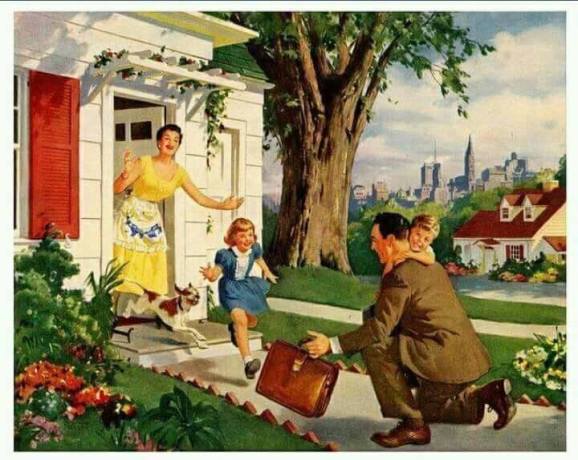 Fathers should be beacons of strength to their families and to the community. Children should happily run to the door and jump into their father’s arms when he arrives home. Wives should be able to trust, respect, rely on, be proud of, and follow their husband’s lead because they see that he is a man of integrity and that he treats her and his children well. And, ultimately, an earthly father should follow the example of his Heavenly Father and “be an example of the highest Christian virtues.”

It is not insignificant that our God has chosen for Himself the title Father. Mortal fathers should remember in whose footsteps they follow. If men only knew who they really are and what their Heavenly Father expects of them, they would push back against the societal tsunami of anti-male feminism and fulfill their inspired roles. Those men who do just that are true heroes and deserve to be remembered and shown respect on this Father’s Day.

As I close this article, I want to pay tribute to my own father. My Dad is my partner, buddy, and pal, to steal a line from Jerry Lewis. He was my first best friend. In several ways, I am closer to him than any person I know. He has been my confidant and friend and a source of strength for me through the years. He was always there for me and always gave me his time. There’s nothing that is upright and just that he wouldn’t do for me. I know he would give his life for me in a heartbeat. And “greater love hath no man than this, that a man lay down his life for his friends” (John 15:13). Fortunately, my Dad does not have to lay down his life in order for me to know he loves me. I thoroughly understand that he loves me because he has said it and shown it my entire life. I pay him a personal tribute and take this opportunity to publicly express my gratitude for all his sacrifices for his family and to tell him I love him dearly. I love you, Dad! 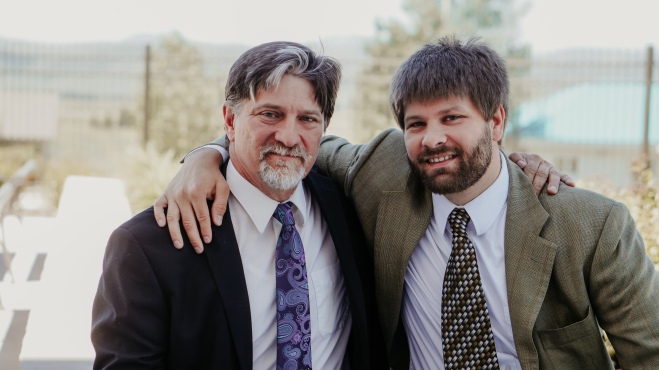 Me and my Dad

The role of father is truly special. It is also vital to the proper function of society. The extent to which society rises or falls depends on the stability of its families. And the steadiness of a family relies, to a very large degree, on the strength of its presiding officer, its patriarch, its head, its father. Words cannot express how important fathers are! Women, cherish, support, and follow your husbands. Children, honor and obey your fathers. And men, be the fathers, husbands, and sons God intended you to be – righteous, loving, stalwart, upright, just, firm, and strong. Enjoy this Father’s Day and know that even though society at large may not respect you, there are many people left who honor you for faithfully fulfilling your decisive role as fathers.

6 thoughts on “A Tribute to Fathers”