I have been asked why I think President Trump’s nomination for the next justice of the Supreme Court is a terrible choice. This brief article will highlight the reasons why Judge Brett Kavanaugh is an Establishment insider, an enemy to the U.S. Constitution, and a danger to our Republic.

The first red flag that stood out to me when I began reading up on Judge Kavanaugh was his horrendous grasp on the Fourth Amendment to the Bill of Rights. Kavanaugh has openly sided with the government’s violations of our privacy. In fact, he has supported and upheld the NSA’s warrantless domestic spying program, astonishingly calling it “entirely consistent with the Fourth Amendment.” He has also supported random, warrantless police pat downs as legitimate.

I prize the Fourth Amendment so highly that I would reject Judge Kavanaugh solely based on his stance regarding it. However, the more I looked, the more problems I saw with Kavanaugh. One of the things that worries me is his deep connections to corrupt families and personalities in Washington, D.C. Kavanaugh is a huge friend of George W. Bush and Jeb Bush, for instance. Kavanaugh was on the legal team that helped swing things in Florida in favor of George W. during the infamous recounts. He later served as an aide to George W. Bush in the White House. Kavanaugh was in fact so close to Bush that he not only married one of the president’s secretaries, but was instrumental in convincing George W. to nominate John Roberts to the Supreme Court – a decision which has turned out to be an unmitigated disaster. Every indication is that Kavanaugh is an active Establishment insider – part of the “swamp” Trump has failed so miserably at draining.

Another area of concern is abortion. A Vox article included this statement:

“But as Trump has considered Kavanaugh to replace Kennedy, some conservatives have started to voice concerns that the judge isn’t reliably conservative enough. Some conservatives, including Sen. Rand Paul (R-KY), have pointed to Kavanaugh’s record on health care; others are concerned that Kavanaugh told senators during his DC Circuit confirmation hearing that he’d respect precedent on abortion and declined to share his views on Roe v. Wade.”

We do not need a “go-along-to-get-along” guy on the Supreme Court. We do not need someone who will “respect precedent” when that precedent is clearly immoral, unconscionable, and wrong. Abortion is little more than infanticide – a genocide of the unborn. Instead of putting forward a man who respects the Constitution’s guarantee of a person’s right to live and who is uncompromising on this crucial life-or-death subject, Trump has given us a man who is seemingly content to see “precedent” continue and not rock the boat. I remind the reader that over 70 million babies have had their lives snuffed out since Roe v. Wade. Tolerating this sort of reprehensible “precedent” reminds me of what Thomas Jefferson wrote in his Notes on the State of Virginia about slavery:

“And can the liberties of a nation be thought secure when we have removed their only firm basis, a conviction in the minds of the people that these liberties are the gift of God? That they are not to be violated but with his wrath? Indeed I tremble for my country when I reflect that God is just: that his justice cannot sleep for ever.”

In addition to these alarming views, it turns out that Kavanaugh has been involved in high-level cover-ups for a long time. I speak specifically of the Vince Foster case. While the world claims Vince Foster – a White House aide during Bill Clinton’s presidency – committed suicide, the cold, hard evidence suggests he was murdered. The man who wrote the report ignoring and covering up crucial evidence demonstrating foul play was none other than Brett Kavanaugh. Kavanaugh was one of the lead investigators in this case and was privy to the evidence countering the official narrative. 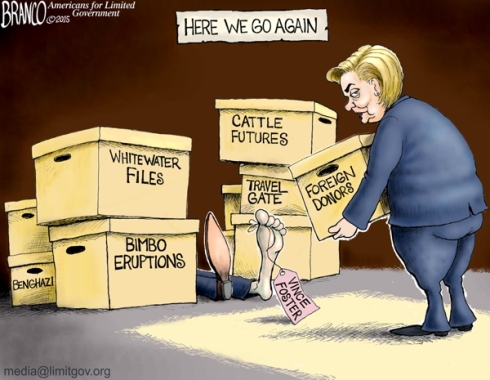 This scandalous episode goes to show that when you rub shoulders with, and do favors for, powerful people like the Clintons and Bushes, you advance up the political ladder. And Kavanaugh is about to advance almost as high as one can go. I highly recommend listening to this hard-hitting interview about Kavanaugh’s involvement in the Vince Foster cover-up conducted by Cliff Kincaide at America’s Survival Inc.

It is also worth noting that Kavanaugh wrote an opinion that was later used by Justice Roberts as a judicial justification for keeping Obamacare. In a lengthy article last week titled “How Potential SCOTUS Pick Brett Kavanaugh Wrote A Roadmap For Saving Obamacare,” Christopher Jacobs explained:

“Even as he avoided a definitive ruling on the merits of the case [in 2011], Kavanaugh revealed himself as favorably disposed to the [individual] mandate. Worst of all, in so doing, he cultivated a theory that ultimately led Chief Justice John Roberts to uphold the mandate. . . .

“In Kavanaugh’s view, the mandate could fit “comfortably” within Congress’ constitutional powers [to tax]. . . .

“Conservatives might argue amongst themselves about which is worse: An unelected judge opining on how a mandate to purchase a product could meet constitutional muster, or that same unelected judge giving Congress instructions on how to ensure it will. . . .

“The gambit worked. Roberts ultimately relied upon that argument from Verilli by way of Kavanaugh to uphold the mandate as a constitutional exercise of the taxing power. That Kavanaugh, like Roberts, used the last few pages of his opinion to decry the “unprecedented” nature of a mandate upheld via the Commerce Clause power does not mitigate his favorable analysis of a mandate upheld via the Taxing Clause power.”

I leave you to read the rest of the article for yourself. Suffice it to say, Kavanaugh has wrested the U.S. Constitution, massively expanding the Founding Fathers’ original intent regarding the taxing power to allow the federal government to punish (i.e. tax) individuals for not accepting government-controlled health care. Doing so led the Supreme Court to uphold the alleged constitutionality of Obamacare in 2012.

In fairness, let me briefly mention a few areas in which Judge Kavanaugh seems to be good. When it comes to religious issues and protection of religious worship, he appears sound (though, frankly, I dispute the depth of one’s religious conviction when I know they are not vehemently opposed to Roe V. Wade). Regarding immigration, what I’ve read so far indicates that Kavanaugh’s track record is appropriate. On the ever-contested issue of firearms, it seems Kavanaugh is also pretty consistent.

These three areas show that Kavanaugh is not 100% compromised. However, as the concerns I’ve raised should demonstrate, there are many red flags that ought to disqualify Kavanuagh as a serious contender for the Supreme Court. Unfortunately, however, President Trump disagrees.

Ultimately, this terrible nomination is a result of Trump’s own egregious lack of constitutional understanding, his naiveté and overreliance on the advice of his corrupt aides, and his lack of understanding of conspiracy and intrigue. As I said clear back in 2016, Trump is a puppet who doesn’t know he’s a puppet.

I don’t necessarily believe Trump is malicious. However, he is a man who is being manipulated by the people he puts around him and places confidence in. As he has demonstrated time and time again, it is easy to flatter and trick Trump and talk him out of his opinions. And since he is always looking to “make deals,” he is willing to compromise hard-and-fast principles in favor of mainstream, populist, lets-not-rock-the-boat policies. Thus, picking Kavanaugh – a Bush lackey and Establishment insider – was just “good business.” And it was also a tragically missed opportunity to put a true constitutionalist on the Supreme Court.

I sincerely hope I’m wrong about Judge Brett Kavanaugh and that, assuming he makes it to the Supreme Court, he will issue opinions harmonious with the U.S. Constitution. However, I don’t think a 53-year-old judge who has been in the business for so many years will suddenly change his stripes. I predict, if his nomination is approved, that he will continue to rule against the Fourth Amendment and uphold Court “precedent” in numerous areas that conflict with the founding ideals that made America the greatest nation in world history.

I truly believe, from the preliminary research I’ve done, that Judge Kavanaugh presents a danger to the Republic. He is a threat precisely because he belongs to and serves the insider clique that dominates Washington. If Trump truly wants to “drain the swamp,” why did he nominate a man bred and groomed in the swamp to the highest court in the land? Perhaps only time will tell what is to become of Kavanaugh, but I recommend watching him like a hawk and holding him strictly accountable, as we ought to hold all public servants accountable for their fidelity (or lack thereof) to the U.S. Constitution.

"The only foundation of a free constitution is pure virtue, and if this cannot be inspired into our people in a greater measure than they have it now, they may change their rulers and the forms of government, but they will not obtain a lasting liberty. They will only exchange tyrants and tyrannies." - John Adams to Zabdiel Adams, June 21, 1776
"If my people, which are called by my name, shall humble themselves, and pray, and seek my face, and turn from their wicked ways; then will I hear from heaven, and will forgive their sin, and will heal their land." - 2 Chronicles 7:14
"Of all the dispositions and habits which lead to political prosperity, religion and morality are indispensable supports. In vain would that man claim the tribute of patriotism, who should labor to subvert these great pillars of human happiness, these firmest props of the duties of men and citizens." - George Washington, Farewell Address, 1796
Loading Comments...
Comment
×
%d bloggers like this: