“Am I therefore become your enemy, because I tell you the truth?” – Galatians 4:16

What is truth? This fundamental question has been debated through the ages. Truth is often obscured behind a smokescreen of lies and distortions. Because of concerted efforts to obscure truth, many people have become weary of searching for it. Our modern society, plagued by a Marxist mindset, has gone so far as to reject the notion of truth entirely. All things are relative and subjective, we allege. Yet, for those willing to accept it, there is a simple and eternal answer to the question, “What is truth?”

In a modern revelation, the Lord defined truth thus:

“And whatsoever is more or less than this is the spirit of that wicked one who was a liar from the beginning” (Doctrine and Covenants 93:24-25).

Automatically, many of you who are not members of The Church of Jesus Christ of Latter-day Saints that enjoys this refreshing revelation will dismiss it as fickle fantasy or Devilish delusion. Yet, whether you believe the verity that God speaks to man today and reveals His will to prophets as He anciently promised that He would (Amos 3:7), you must admit the logical soundness of this definition. Truth is, simply, a knowledge of the reality of all things. It is an accurate description of the nature and veracity of things as they really are and as they really will be.

Truth is eternal. Truth does not change. Truth does not bend to popular opinion. Truth is a constant now and forever regardless of popularity or application. We may say that if a thing is not eternal, it is not truth. Naturally, then, we cannot speak of all things as “truth.” A temporary and fleeting thing might be deemed “true,” but it is not necessarily truth.

Truth is of higher-than-normal importance and includes such things as eternal laws, principles, and realities. Facts, if they are indeed true, will never change. If something was true yesterday, it will be true today, and it will be true tomorrow.

Being immutable and unalterable, truth commands our approval and recognition. In all things, we should seek to obtain, promote, and defend truth. It doesn’t matter if we dislike it or if it is unpopular. Truth does not care about your feelings. Truth does not consider your situation. Truth merely is. It is simply the reality of things as they were, are, and are to come.

All truth is not of equal value. It might be true that you ate a peanut butter and jelly sandwich for lunch. But is that “truth” in the sense we are discussing? Is that as important or meaningful as the reality that God exists, for instance? One of our never-ending tasks in life is to discern trivial truths from imperative ones – and then cherish and follow the impactful truths. We must come to learn what is truly important and what is not; what is eternally relevant and what is fleeting. 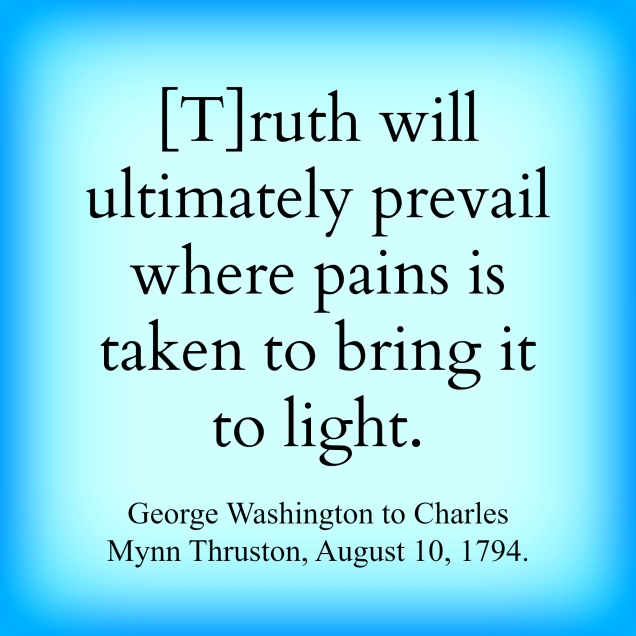 Truth is of such significance that the Lord was able to declare “the truth shall make you free” (John 8:32). He understood this better than anyone, for He is the sovereign Lord of truth. When the hardhearted Jews sought to kill Him for His teachings, He boldly testified of the source of His doctrine:

All truth, ultimately, comes to us from Almighty God via the Holy Spirit. In fact, it can come in no other way. John taught:

“And it is the Spirit that beareth witness, because the Spirit is truth” (1 John 5:6).

The Spirit – not our meager intellects, physical senses, or instruments of science – conveys truth. Truth, being eternal, cannot be learned through temporal means. It is vain for the man of science or the doubting atheist to demand “proof” of God’s existence, for God can only be known through the individual revelations of His Spirit to your spirit and cannot be quantified.

Furthermore, His Spirit does not give you sacred revelations if you do not ask for them or if He knows that you would not be humble enough to accept and follow them if received. “Ask, and it shall be given you,” we are told (Matthew 7:7). But only ask in faith and with the sincere willingness to follow any answer received or your petition will go unanswered.

As noted, truth is eternal. All truth harmonizes with itself. A revelation of truth from God in New Testament times cannot contradict a truth revealed in Old Testament times, and vice versa. By the same token, if it was true 2,000 years ago that “the Spirit is truth,” then God would reveal the same verity to modern man. This principle of eternal consonance bears itself out in a contemporary revelation through the Prophet Joseph Smith. In that revelation, the Lord explained:

And again, the Savior has declared:

His testimony of Himself has always been the same. During His earthly ministry, the Lord taught:

If we come to Christ and seek the Spirit, we will know that Jesus spoke the truth. All truth comes from the same source. And spiritual truth can only be learned through the Holy Spirit. Now, as always, “the right way is to believe in Christ” (2 Nephi 25:29).

Here are a few truths I have learned for myself through the Holy Spirit, or the Spirit of truth. I know these things are real and I testify of their authenticity with all the passion and energy of my soul.

I know that my Heavenly Father exists, that His Son Jesus Christ is the Redeemer of mankind, that the Holy Ghost actively imparts truth to those who listen with an open heart are willing to heed His promptings, and that these are three separate, personal Beings who tirelessly work for our salvation.

I know that I am a literal child of God who once lived in His presence and that He loves me.

I know that the Lord’s words “shall not pass away” (Mark 13:31) because they are truth and truth is eternal.

I know that the Holy Bible, when accurately rendered and properly interpreted, is the divine word of God.

I know that The Book of Mormon is true scripture revealed by Heaven and that it supports and clarifies the Bible’s witness that Jesus is the Christ and that it is only through Christ’s atoning blood and mercy that we are saved.

I know that the Lord reveals His will to mankind today through living prophets and that at this current time the Lord’s prophet, seer, and revelator on earth is a man named Russell M. Nelson.

I know that the U.S. Constitution was inspired by the Lord and that it is the only political document on earth that bears His divine stamp of approval.

I know that our Founding Fathers were good, honorable, and wise men – devout Christians raised up by God to establish the first free nation in modern times.

I know that the United States of America, despite her glaring flaws, is the greatest nation on earth and constitutes a Promised Land and the Lord’s base of operations in these last days of turmoil before His return in glory.

I know that communism is Satan’s counterfeit to the Lord’s Gospel and to His Plan of Freedom and that it is the greatest threat to mankind.

And I know that the Lord has already triumphed over Satan and that all of Satan’s schemes will eventually fail, regardless of how dominant they appear today.

I don’t know all things perfectly, but these things I do know with unshakable surety. I testify of them. I give my personal witness of their validity and truthfulness. I testify that the Holy Ghost has born witness to my soul of these things. I will wear out my life defending them and promoting them because I know, even if others do not, that they are true.

What is truth? Truth is a knowledge of things as they really are now and in eternity. Truth is eternal. Truth emanates from God. Truth can be learned only through the ministration of the Holy Spirit. Truth will triumph over all lies in the end. And because it reigns eternally victorious over all error and centers in Jesus Christ, the truth shall make us free.

4 thoughts on “What is Truth?”