This past weekend I watched in disgust as the news and social media lit up with chatter about the “royal wedding” of Prince Harry and his American bride Meghan Markle. News commentators gushed about how “beautiful” the event was. The hearts of millions of fawning young girls fluttered with excitement. And crowds around the world cheered and overflowed with emotion. What is wrong with the psyche of America when your average person gushes over a “royal wedding” in a foreign land? 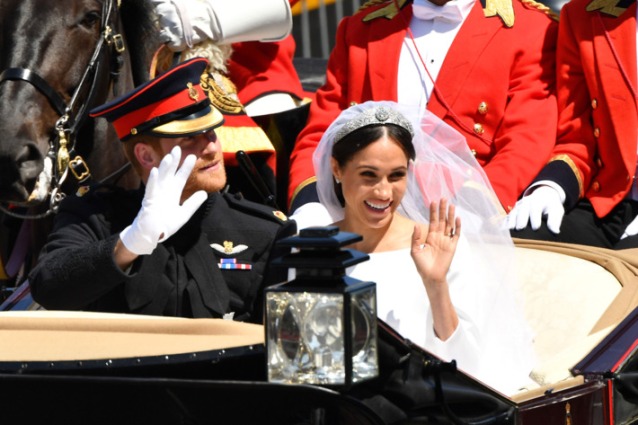 There are many things that could be said about the British Royal Family. For instance, I could discuss the rampant pedophilia and Satanic Ritual Abuse (SRA) that goes on among them behind closed doors. I could cite the book Dope, Inc. and reveal the Royal Family’s involvement in the world-wide opium industry. I could even stoop to talking about the Royal Family’s recent, and possibly continued, use of a “groom of the stool” (I’ll leave that to you to investigate). No, this article won’t be about the Royal Family. Rather, I want to discuss the problem of Americans fawning over the notion of royalty and why this is an omen of dark days to come.

In 1776, our forefathers rebelled against the British Crown, declaring Independence for the new American states. On July 9, 1776, the inspired words of the Declaration of Independence were read to the crowds in New York. So captivated with feelings of Liberty were they that the crowds promptly marched to Manhattan and tore down and demolished a statue of King George III. The statue was later melted down and made into musket balls which were used to shoot invading British Red Coats. 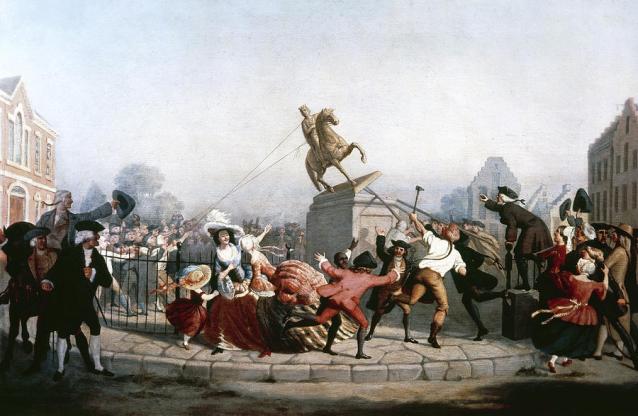 This story depicts the true American feeling towards royalty. Real Americans will have no king over them. Real Americans love self-rule and submit only to the dictates of one King – the King of Heaven. Thomas Paine, who is often erroneously called an atheist, wrote in his classic Common Sense:

“But where says some is the King of America? I’ll tell you Friend, he reigns above, and doth not make havoc of mankind like the Royal Brute of Britain.”

Yes, the only King of America is Christ the Lord, the King of kings. Our forefathers acknowledged His right to rule. They endeavored to establish America as a free and Christian society – a shining city on a hill and beacon of hope, virtue, and Liberty to mankind.

“A moral Ruler of the Universe – the Governor and Controller of all human power – is the only unlimited sovereign acknowledged by the Declaration of Independence.”

Only God is acknowledged as the superintending power in the United States – and this in our nation’s first official document! Perhaps both of these great men took their lead from ancient Gideon who, when asked by Israel to rule over them, replied:

“Yet that we may not appear to be defective even in earthly honors, let a day be solemnly set apart for proclaiming the charter; let it be brought forth placed on the divine law, the word of God; let a crown be placed thereon, by which the world may know, that so far as we approve of monarchy, that in America the law is king. For as in absolute governments the king is law, so in free countries the law ought to be king; and there ought to be no other. But lest any ill use should afterwards arise, let the crown at the conclusion of the ceremony be demolished, and scattered among the people whose right it is.”

Let the crown of supposed “royalty” be demolished! The People – and only the People – have the right to establish their own laws and rule themselves.

Fortunately for us, our wise Founding Fathers submitted their finite will to God’s wisdom and were inspired to create and forge a Republic of unequaled Freedom, prosperity, happiness, security, influence, and opportunity. The U.S. Constitution is the embodiment of the principles of Liberty and is the most sacred relic our forefathers handed down to us. Article 1, Section 9, Clause 8 of that document states: “No Title of Nobility shall be granted by the United States.”

Thus, it is a canonized, official part of our government that there shall be no nobility in America. The concept of royalty was repugnant to our noble Founding Fathers. They fought against would-be kings and refuted the notion that one segment of society was destined to lord over the rest.

It should always be remembered that it was the monarchists and elitists they waged their War of Independence against. If the British Royal Family had its way, the United States would have never been born and you would be even today a subject of Britain.

You would absolutely not enjoy the rights secured under the U.S. Constitution, nor the wealth provided by the American free enterprise system, nor the protection of just laws and honorable men who cherish their God-given right to keep and bear arms. If the Royal Family had their way, you would be a slave.

It was against elitists who fancied themselves “royalty” that our patriot forefathers fought. American blood was spilled because the British Royal Family wanted to keep us in chains. The War of 1812 was waged for the same reason and by the same forces of evil.

It was against this same clique of elitists inside the United States that Thomas Jefferson, James Madison, Andrew Jackson, and others battled on the monumental issue of a national bank. Unfortunately, the Americans living in 1913 lost that battle and the Federal Reserve monstrosity exists as a parasite sucking the lifeblood out of this nation.

This same war has always been fought between the forces of Freedom and the sponsors of tyranny. Throughout history, tyranny has all too often taken the form of a monarchy, such as the British Royal Family represents. These monarchies, led by self-professed demigods and self-absorbed elitists, have done little more than oppress mankind, stifle growth, and impede the course of Freedom. 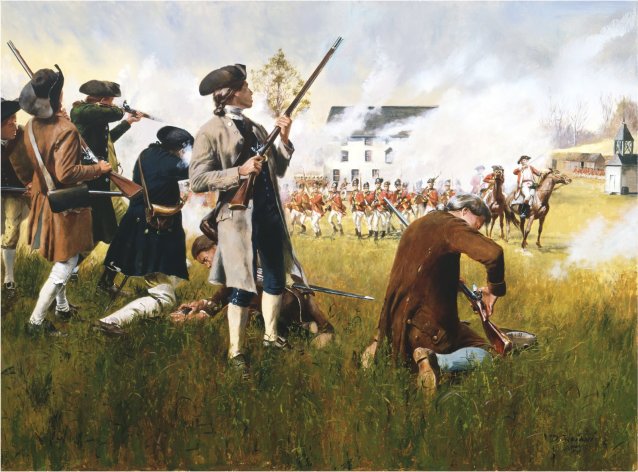 The patriots of 1776, however, struck a blow against the British Royals and gave America a reprieve from monarchical tyranny. They provided us the opportunity of self-government and Liberty. They suffered, sacrificed, and spilled their blood so that we would be free of the suffocating influence of the British Royal Family. Yet, today Americans gush over “royalty” and follow every detail of the British monarchists’ lives. Our forefathers would be rolling in their graves if they could witness this shameful, sycophantic spectacle.

The ever colorful John Adams once wrote:

“Posterity! You will never know, how much it cost the present Generation, to preserve your Freedom! I hope you will make a good Use of it. If you do not, I shall repent in Heaven, that I ever took half the Pains to preserve it” (John Adams to Abigail Adams, April 26, 1777).

Indeed, what have we done with our bounty of Freedom so graciously secured for us by our patriot forefathers?

On Independence Day, 1798, Noah Webster gave a speech in which he stated:

“[O]ur fathers were men – they were heroes and patriots – they fought – they conquered – and they bequeathed to us a rich inheritance of liberty and empire, which we have no right to surrender.”

Yet, surrender we have. Today, some “Americans” wish we had a king. Millions grovel at the foot of the federal government petitioning for handouts and favors like any peasant of the feudal age. With my own ears, I heard a professor at Brigham Young University-Provo declare that the “divine right of kings” was not only approved by the holy scriptures, but that we should have a king in America. What’s worse, some of my fellow students in the class voiced their agreement and approval. The sickness of royal sycophancy is spreading.

Think of how polarized the United States has become. This divide is never more visible than in an election year. In almost every election, we hear the cry of “rigged” from the losing side. Two years after her defeat, Hillary Clinton is still telling interviewers that Donald Trump rigged the election and she should be the rightful ruler of America. And make no bones about it, Clinton is an elitist who sees herself as a ruler, not a servant of the People.

The crowds have developed a sycophantic allegiance to their favorite candidates, whether Hillary Clinton, Donald Trump, or Bernie Sanders. They act fanatical in their support of these individuals who, in their eyes, can do no wrong and represent all that is good. The opposing sides are closing ranks and digging in. Both sides are so embittered and hate-filled that they have come to blows more than once. Soon, there will be no chance of even having an open and free dialogue and only compulsion will decide things.

Judging from history, these terrible trends portend severe strife and very possibly civil war. It is altogether conceivable, for instance, that a losing candidate in a national election could reject the vote tally, assert that he was cheated in a rigged election, declare himself king, and have half the population follow him. It sounds outlandish in the 21st Century, yet it has happened in the past so many times that we would be foolish to dismiss the very real possibility. 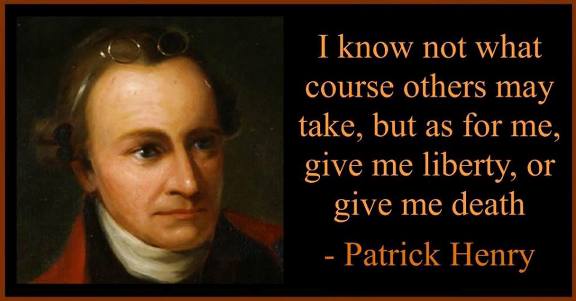 Yes, we live in an age of demigods and cults of personality. Rule of law means virtually nothing. The U.S. Constitution is all but forgotten. States have lost their sovereignty and the federal government is run like a dictatorship with the president wielding extreme and unlawful amounts of power. And the American heritage of opposing the British Royal Family and monarchists and tyrants of all stripes has fallen by the way side.

If the Prince Harry’s and Meghan’s “Royal Wedding” is any indication, the American People are ripening for servitude to the first person bold enough to declare himself a king. The first Caesar bold enough to march his legions across the American Rubicon might just gain himself a kingdom, and bequeath to the American People thralldom. I pray, however, that if that dark day ever comes, the characteristic American spirit will revive and we will repeat the glorious days of 1776 when King George III was toppled and Independence from tyrants was declared before the eyes of the world. Long Live Liberty! Sic Semper Tyrannis!

One thought on “Royal Sycophancy”